It was a frosty one last night. I had minus 13.6 degrees this morning. That actually wasn't the worst of it. When I went outside at 9 a.m. to measure the snow we got overnight, I quickly found out there was a real mean NNW wind. WCAX was cautioning about the windchill factor, and that was certainly something to consider here. At that temperature, with even a 5 m.p.h. wind, the windchill would be around 30 below zero. Cold enough, for sure. What I'd call a real nosepincher morning. I think I cleared the deck of snow (we got about half an inch) in record time and retreated into the warm house. The snow is very dry at these temperatures, so it's like whisking it away rather than shoveling it. 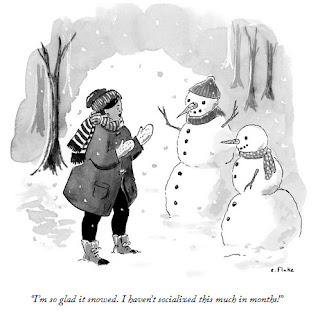 Andy Rudin sent me this cartoon, and while our snow is definitely not the  wet, sticky snowman-making variety, I can identify with the concept. There have been many days this winter when I didn't see a soul to socialize with all day long. I think that is going to be our "normal" for a few more weeks, at least, with so many people coming down with the virus. We will do the best we can, even if we need to go outside and create snow-pals. At least we can create them with broad smiles, which we no longer see much of with all our friends wearing masks.

Some schools closed today due to a combination of the rising Covid infections and this deep cold. I don't think schools ever closed because it was too cold when I was in school, and I remember getting bundled up with heavy woolen snowpants, jacket, boots, double mittens and hats to walk to school. The final precaution was a big woolen scarf that I could pull up over my nose and mouth. My woolen toque came well over my ears and forehead, just leaving a slit for my eyes. I remember my eyelashes getting frosted 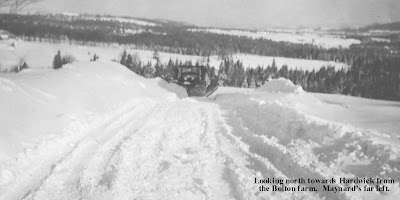 from my moist breath as I plodded across the "flat" to the Plains School. Some kids had to walk further than I did, but most of them walked along roads somewhat sheltered from the wind by trees, bushes and tall snowbanks. Still they arrived at school with icicles and frost on their lashes, and scarfs stiffly frozen from the moisture of their breathing. I had to face the wind all the way to school on those cold mornings. It 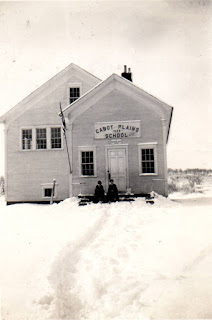 wasn't bad coming home with the wind at my back. Fortunately, I didn't have very far to go, but some of the kids walked a mile or more to school every day, no matter what the weather. At least we were moving, not standing still waiting for a bus to come.

Above is the road up to the farm where I grew up. The view we're looking at here is just about due North, and you can imagine how much wind swept over those hills and fields directly from Canada. That picture was taken in the late 1930s or early 1940s, I think. 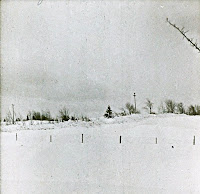 On the upper right is the Plains School when I went there. The path in was the width of the shovel, no extra effort expended; and to get to the path, we had to climb over the high bank left by the snowplow. There doesn't seem to be much snow on the ground, so I'm guessing this was taken either in early winter or in the spring.

This next picture was taken around 1939. It was called Timmons Road and went past our house from what is now Cabot Plains Road, over the hill and through the woods towards Danville Hill Road. My good friend, Esther Foster lived there. She and her brothers and a cousin (or maybe it was a step-brother, I'm not sure) walked that route every day. They were often late, but it was a long way. I'm guessing about a mile and a half or more. I would wait as long as I could for them, but I didn't want to be late, so I usually walked to school alone. We would walk home together, and sometimes I would walk part way home with Esther up this road. That road is no longer kept open, and now has grown in so there's hardly a trace of it at this end, at 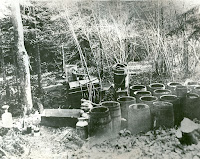 least. I haven't been over to the fields beyond our pastures in years. The property before the Foster place belonged to Dan and Corsie McLean. Dan put his still (pictured on the left) on the brook in my Grandfather Bolton's pasture during prohibition. My grandfather made him move it, but within a short time, it was back, in a slightly different location, until the feds raided it and Dan and several area men went to jail and paid fines for bootlegging. But that's a story for another time. Now I need to check my email and get back to work. Thank you for sticking with me down memory lane!