It was no surprise that Joe's Ponders awoke to a white world this morning. There was plenty of warning from our friends in weather stations. We had a fair amount of precipitation from the snow and the almost constant rain showers that kept moving through here yesterday. The rain began to turn to mushy, wet snow at around 9 p.m.. At first it didn't stick to anything, but as the temperature dropped during the night, it became "measurable snow" and I found about 3/4" on my weather board in the morning. Combined with the rain, I measured .97". The good news was that after a cool start this morning, the temperature got into the high 30s and low 40s and most of the snow was gone by noon when the sun came out. Even then, the temperature got only into the low 50s and there was a brisk wind. I worked outside for an hour or so, and it was very comfortable. I tried, without any success at all, to find a warm place in the sun to enjoy for a little while before I went inside, but everywhere I went, there seemed to be wind whisking around corners that kept the air a tad cool for comfort.

I had some trees pruned Thursday and Friday. Aubrey from Cabotina Enterprises in Peacham did a fabulous job on my old apple trees. I wouldn't recognize them if I hadn't watched him working. At first I panicked at the amount of branches he was removing. However, the final effect is stunning. All of them are old and had never had much, if any, pruning. There were some dead or dying limbs that had to be trimmed, and although they are looking bare and scarred, given a little time that will change. I'm excited to see how they come alive this summer. Aubrey told me it would take a couple years for them to get fully recovered, but he maintains they will be healthier. I was ready to remove a couple of them, but he's convinced they will be ok. He is a very nice young man and I am very pleased with the job he did. He actually worked well after dark, using a powerful headlamp. He started the job on Thursday a little before noon and then on Friday put in another seven or eight hours, working until nearly 11 p.m.! I checked on him regularly, 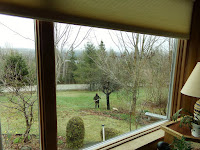 especially after dark as there is no yard light at the end of the house where he was working, and I couldn't tell is he was ok or not. I worried about a limb coming down on him or something. But he was fine. He had rain gear that kept him dry and even when the rain turned to snow, he said he was "toasty warm." He told me he often works after dark. The photo at the left is when he began work on Thursday. 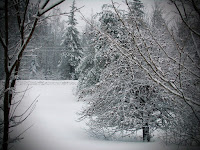 This is a before and after view. My crabapple tree towards the front of the house was in sad need of attention. It had some dead limbs, and was such a tangle it didn't bear as much fruit last year as it normally does. I'm hoping getting this radical "haircut" will improve the health of the tree and can't wait to see how it blooms in a few weeks. This view was taken this winter and you can see how many branches there 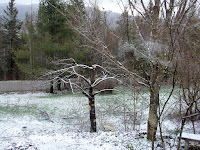 were crowded onto this poor tree. At right is how it looked this morning! 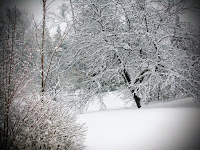 This is the other apple tree, my favorite apples for applesauce, was also sadly overgrown and had lapsed into being not very productive at all. Some years it 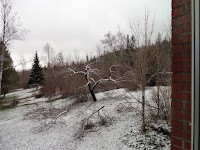 had fruit, but about every other year there would be none. It used to be loaded with blossoms and apples. It looks completely different now - (see photo on the right, taken this morning.) I have high hopes that it will thrive now - at least, it won't be in danger of splitting off from dead wood and over-weighted branches during heavy snow periods.

The other two trees he did for me are ornamental crabapples. They produce tiny apples 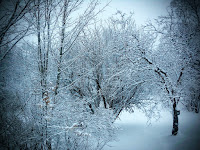 that birds love, especially partridges. The one on the right hasn't produced at all for a number of years and there was a lot of dead wood. I threatened to have it cut down, but hesitated because when it blooms, it is beautiful. Aubrey said he thinks it will revive with the pruning and a little fertilizer. The ornamental below it had lots of branches, but hasn't bloomed for a couple of years. Both used to be absolutely beautiful every spring. One was light pink, the other darker. 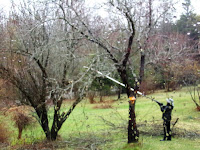 Here Aubrey is just beginning to trim the two ornamentals. 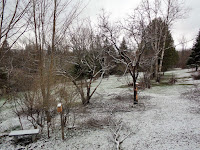 He worked very carefully, and left no knobs where he removed limbs - they were all deftly trimmed away. I had asked that he concentrate on the other two trees and just do what he thought was best for the ornamentals, so they didn't get quite the radical treatment the other two got. They look much better, though, as you can see in the photo I took this morning, above right.

I will take more pictures later on when the trees bloom and/or get some leaves. Now the big job for me is getting the limbs piled up and discarded. I could have had Aubrey take them away, but I wanted him to spend his time pruning, not hauling brush, and Jamie said he and Marie would come down and give me a hand with the brush. I piled some today and if the weather is ok, they will come with the tractor and fork lift tomorrow. Another task I've been putting off has been accomplished!

Gretchen Farnsworth let me know today that the loons have come back to the nesting platform. This is excellent news, and if all goes well, ...