Mindy Precourt notified me that a set of wooden steps floated onto their beach area and are now secured there for the owner to retrieve. Mindy is at 162 Edgewood Ave. Here is a photo of the steps - a bit hard to identify, but I'm sure someone will be looking for them!

The water has been a little high recently with all the snow runoff, and there have been several very windy days and nights that rattled windows and knocked down trees and branches in several places. I noticed a tree across the Keenan's driveway (I believe that's where I saw it - I can't recall exactly) and all along West Shore Road there is evidence of trees coming down or limbs breaking off and having to be moved out of the road. It happens all the time, and gets the dead wood removed from the forest.

Speaking of broken limbs and such, I've been cleaning out my lilac bushes at the front of my house recently. It's been a while since they have been trimmed, and it's a pleasure to be able to see through them to the lower lawn area. There is a lot more to be done, and I have professionals coming to do the apple trees. It's a little late in the season, but we figured they are so badly in need of attention they will benefit even though it's a tad late to be doing it. I have at least one ornamental crab that may need to be taken down - but another ornamental, a regular crab apple and my pie apple tree just need pruning - badly. That is not a task I want to undertake. I'm good with taking out lilac shoots and stray branches here and there on other trees, but I'm not about to climb up there with a chainsaw like Fred used to do. 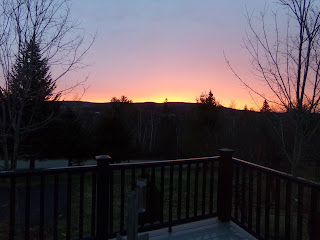 We had a little rain during the night, and I measured .01 inch in my measuring tube. Today we had been a mix of weather - this morning at daybreak the sky was beautiful. I got this photo just as the colors were fading. I wish I'd been a few minutes earlier. The clouds settled in and it was dreary until mid-morning and then the sun came out and it was glorious for a few hours. That was when I got outside and trimmed the lilac bushes. 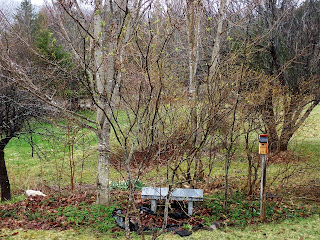 There is a serviceberry bush beyond the lilac that needs attention - I may get to that later; and a hydrangea that has made a miraculous comeback after the snow split it badly a couple of years ago and I thought it would surely die, but it flowered profusely last year and now could use some attention.

Another project I hope to get to this summer is reclaiming space around the memorial bench in front of the lilacs. A really aggressive pest plant has taken over where there used to be blue myrtle (vinca minor, also sometimes called periwinkle). I will see if I can make any headway clearing it away and then hope to put down some pavers in that spot to try to keep it from overflowing the bench base entirely. 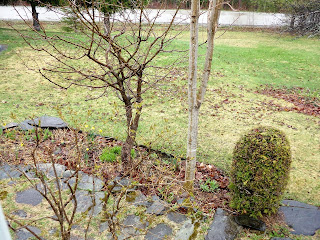 Yesterday I finished edging the border along my walkway. My neighbor, Anita Kelman, did a great job of weeding the bed last fall; she then pruned the little ornamental crab tree seen here. She did it as soon as possible this spring, and I'm hoping it will show some nice color this year. Last year I think there were two or three blossoms, and that was all.

As you can see, our grass is beginning to get a tinge of green here and there - we're way behind other spots that are a tad warmer, but this afternoon a light rain has started, and that will be great for getting everything going and growing. We'll be mowing grass in no time!

Just a reminder - if you have been hesitant about getting your Covid immunization shot(s), or if you've had one and for some reason don't want to get the second, I hope you will rethink your decision. There have been so few serious reactions, it really makes sense to get immunized. The disease is a far greater risk than the possibility of a relatively mild reaction to the shot. I know there have been reports about the second shot being troublesome, but think of what could happen if you get Covid. Not only will you be safer, but so will your loved ones and neighbors. We need to reach herd immunity in order to overcome this terrible disease, and to reach that point, we must reach a high percentage of people vaccinated. I will gladly show my card to anyone who needs to be reassured that I'm fully vaccinated. There will certainly be places I will want to go and things I'll want to do that will require that, and I'm ok with it. If I want to travel or go to some venue that allows only those who are fully vaccinated, I am ready! I hope you will be, too. We are all looking forward to a more normal summer being able to socialize and move about freely without fear of getting seriously ill. If we all do our part and get the vaccine, Covid-19 will have no place to go and will die out. How great would that be?!

Gretchen Farnsworth let me know today that the loons have come back to the nesting platform. This is excellent news, and if all goes well, ...