My Friends, It's Cold Outside!

The thermometers here at my house are registering zero degrees this morning! Yesterday morning I was expecting there would be no new snow and I wouldn't need to go out to measure; but I was wrong. There was a sifting of new snow on top of a crusty mix left over from Saturday. We had a cold, misty rain/snow mix off and on yesterday, with some fog. There was very little traffic here all day, as near as I could tell. About the only things moving were the birds, squirrels, and whatever else happened to be roaming about in the woods.   Today will be much the same, and it will be difficult to get a good reading of new precipitation. There was a brisk NNW wind yesterday, but today it seems to be fairly quiet. As the sun gets up a bit, the wind may come up, too. If it does, that means the "feels-like" temperature will be well below zero.

I took pictures of my porch last night and again this morning. There are fluffy little white 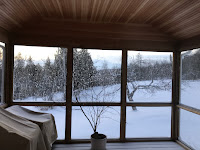 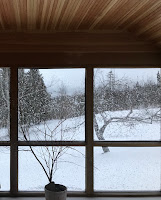 snowballs attached to the screens. No need for me to decorate - Mother Nature took care of it for me! I took the picture on the left just before dark last night, and the one on the right this morning, before sunup. Not a porch-sitting day today, for sure. The tree branch I have in a bucket on the porch has a string of solar-powered lights on it, but it hasn't lighted up for days. Perhaps it will get recharged today. It doesn't take much sunshine to bring the fairy lights back. I should go out and check to see if the power panel is covered with snow or has been moved by the wind so it is out of position, but it's too darned cold. I had to move the porch furniture to one side because the wind kept moving it around and I didn't want a chair to come crashing into the glass door. I was careful to take in any smaller objects, and thought the chairs were heavy enough so they wouldn't move, but not so. We've had some very strong winds this winter.

Speaking of winds, I came across this video the other day. It is Mt. Washington observatory during 107 mph winds on May 19, 2016. I'm pretty sure the area shown is well fenced so nobody is going to be swept off the observatory deck and over a cliff, but still, it is no place for softies up there.

Christmas decorations are gone, seed catalogs are beginning to show up, it's time to think about spring. On New Year's Day I talked with my friend, Amanda Legare who owns Amanda's Greenhouse in Lower Cabot, and she said she is very busy ordering for the coming year. Although the greenhouses are closed now, it is pretty much a year-around job when you consider all the cleaning up late in the fall, then organizing and getting ready for the coming spring. Amanda was one of my co-authors for the Cabot oral history book back in 1999. I was hoping she might be working on writing something or other, but she said she really doesn't have much time for that. She occasionally does a story for the North Star Monthly or the Cabot Chronicle, and I always look forward to those.

Now I need to get busy reorganizing files on my computer and clearing and filing notes from the West Danville book project. A new year, a clean slate. We'll see how that goes!

Cold, but Oh That Sunshine!

We are in the deep freeze zone again, and my thermometer is reading 10F, with a wind chill of -5F. There is plenty of sunshine, though and ...