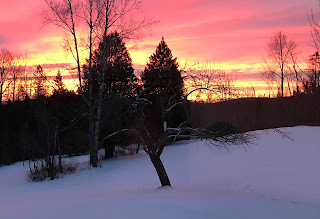 I awoke to a rosy glow in my room, and found this sunrise! It was gorgeous for just a few moments, and then faded and was gone.  The day turned out to be rather dismal, but at least the temperature was up in the high 20s. Actually, it got above freezing for at least a little while around midday.

Monika and Jo-Ann stopped on their way to the airport. Jo-Ann was returning to Texas and back to school. I was worried she might miss her flight, but they were both very casual about the time. Young people! I would want to be there two hours before the flight. But I wouldn't want to attempt any air travel right now - no telling how long you might wait for  your flight to actually leave. I think trains must be much more reliable right now - although connecting on trains can be difficult, too, I guess. Not being much of a traveler, I really don't know about these things, but I'm afraid I sort of rushed Jo-Jo and her mom off this morning because I was concerned about them making it on time.

I have vivid memories of rushing to airports at breakneck speeds to deliver Bill Lederer to his flights. I also remember him racing to the ticket counter and leaving me to haul in his luggage. That was in the 1970s before there were  suitcases with wheels - which he probably wouldn't have used anyway since he preferred dufflebags when he traveled. They had numerous straps and pockets stuffed with books, thermos bottles, snacks, extra pencils, writing pads and who knows what else. And he sometimes had more than one bag, depending on the trip. He was never ahead of time for flights, but he always looked the same - military style shirt or heavy wool sweater, tweed jacket, baggy cargo pants, and a beret - his perception of how an author should look, I guess. It's strange - I remember getting him to Burlington and Logan airports, but I don't remember picking him up. Must be he had friends do that. My job was to have his office in the Peacham house warm, organized, and ready for his return. 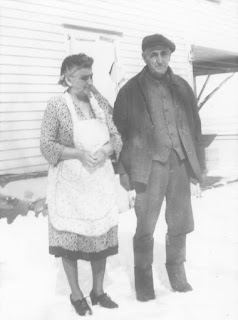 I also remember traveling with my Grandmother Bolton when I was probably 10 or 11. We always traveled by train - except when I was 16 and we took a road trip in my folks' 1941 DeSoto to visit family in Niagara Falls. (That's another story!) Grandma loved to travel, but even more fun for her was staying in a hotel; so I had my work cut out for me to keep her from lollygagging in the terminal so we'd miss our train. As I look back at it, those trips would probably have been a heap more fun for both of us if I'd just let her be the adult and to heck with timetables and schedules! She was never in a hurry to get anywhere. I suspect being away from the drudgery of the farm was more important to her than seeing the people waiting for us at any railroad station. Anyway, that was how I sometimes spent my school vacations. At right, my grandparents, Grace and Aaron Bolton, about 1948, at the farm. She died in May, 1949 and he in November, 1952.

Was that Bill Lederer of "Ugly American" fame plus many other books? He had quite a life. I guess some of his writing skills rubbed off on you?