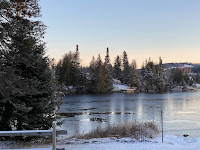 We have had a little nasty weather today. This morning there was a little sunshine, but later there were snow flurries. It never warmed up much all day, and tonight is going to be clear and cold - like in the teens. The thermometer is now reading 24.1F, and slipping downward. 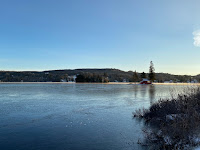 Last week when we had that pretty snow, Gretchen Farnsworth sent me some photos taken from her house at the north end of the pond. The water there is the first to freeze over - it's shallow except for in the channel, and protected from the wind so there is less movement than in the broad lake. I am sure it will be frozen again tomorrow morning. The top photo is looking NNE at the Channel Drive area, and the bottom picture is looking across the pond towards Island Drive, past the two islands, Toll's being the larger island and the smaller one is Pearl's Island.

Right now we don't have any snow on the ground except a patch here and there in shaded spots. I don't think there is much in the forecast until possibly Friday, but the temperature is getting a little colder each day.

I managed to get outside on Sunday to finish a little yard work. Jamie came down on Saturday and got the lawn tractor ready for winter and brought the snow blower into the garage so it's ready if we need it. I put up a couple of bird feeders -- probably a bit early, but it always takes the birds a little time to find the feeders, and I got inspired when we had all that snow. While it may be early to get feeders out, it was nice to be able to set the metal pole I use in the summer for a plant and the hummingbird feeder. The ground is not frozen at all yet. Last year I didn't get a feeder out until sometime in December or maybe even January, and there was plenty of snow on the ground by then. I had only a small feeder attached to the window and later I put out a suet cage. I'm trying out a "squirrel proof" feeder this year, and it will next to impossible for squirrels to climb that skinny metal pole, and if they manage to jump to the feeder, they shouldn't be able to reach any of the seed. I'm also trying some thistle seeds this year. The birds were very selective and left a lot of the cracked corn and other stuff in the mix I bought last year, so this year I'm using black oil sunflower seeds and thistle. The sunflower seeds are treated with cayenne pepper that the birds cannot taste and is not harmful to them, but squirrels definitely don't like it. We'll see how that goes.

Today I spent a good share of the morning on "hold" waiting for help with an old computer account. Ironically, I was going through some files over the weekend and it crossed my mind that having a year behind me doing all the things Fred used to do, I should have no more surprises. But today I got an email with information about a website that was entirely foreign to me.  I tried on-line chatting twice - the first person I contacted seemed to be taking a coffee break between each question I asked, so it didn't take long to figure out we were getting no place. I ended that conversation and tried again a little later, but with similar results. So I decided to try a phone call. It took some time to get connected, and then the person spoke very rapidly with a heavy accent, and I had to ask him to repeat everything he said. I think he got exasperated because he finally suggested I call a different number. I was relieved to end that conversation, too.

His advice to call a different number was good, though, and after about half an hour waiting for a service rep (I learned long ago to just put the phone on speaker and have something else to work on while I wait), I got a very helpful young man that was able to trouble shoot and find what I needed. Another plus about that call: I was offered an option to not have music playing while I waited! How great is that? I wish more companies would do that. All of this took up most of the morning, but my problem was finally solved. Well actually, my "problem" turned out to not be a problem at all, and that was a big relief.

Son Bob stopped by after lunch, and it was good to catch up with him. He went skiing for the first time this season over the weekend, at Jay, I think. His energy inspired me to hike up the hill to Jamie and Marie's. I haven't done that for weeks - probably even months. Too hot, too cold, too wet - any excuse at all! But today I did it. Not without a couple of stops to un-kink my muscles (that hill is a bear!!!) but I made it up and back without  too much panting and groaning. The groaning will probably come tomorrow when I'll feel the full effects of those lazy muscles having been put to the test. I'm hoping to do a repeat tomorrow. If I'm not too sore - or it's not too cold. Or wet.

Sunny morning, but boy is it cold! I'm showing 8.5F here at about 8 o'clock with the sun well up; and recorded an overnight low of ... 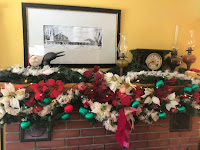