We've had some rain showers off and on today, which we really needed. The air was very mellow this morning - lots of humidity before the rain came. Now it is cooling off a little, but it's still  pretty drippy out there. I was on my porch when it began to rain late this morning, and at first the sound puzzled me. I'm not used to hearing rain on the roof. I never hear it in the house, so at first I thought the wind was rattling something near the house, but I couldn't imagine what it would be. In the meantime, I could hear a pileated woodpecker that seemed to be very close to the house, and for a few moments, it was like there was something very ominous or dangerous about to happen. Perhaps in the woodpecker's world, but in mine there was only some rain on my new porch roof - a very relaxing sound, once I recognized it.

I put a light by the steps that lead into my new pond this morning. I had probed with a slim rod and found a spot where I thought I could dig deep enough to set the pole. Armed with a shovel, post-hole digger and a crowbar, I began digging. I hit rocks about eight inches short of where I wanted to be. I'm not sure, but I think the probe went between or to one side of them, but since the hole was deep enough, I set the pole anyway.

It is a mast that had held a television dish antenna at one time, and had about 20 inches of quick-cast concrete still attached from where they had set it in the ground. I had tried to chip off the concrete, but that was not working. As I struggled with it yesterday, I was reminded of the old movies where prisoners were often shown breaking big stones into smaller ones with a heavy mall, chained together at their ankles, sweating under the hot sun. That was me, but since it wasn't something I had to do, I didn't waste much time or effort there and decided to just bury the thing as it was. Except that didn't work, exactly. Now I have to decide whether to camouflage the lump of concrete that's still showing by planting flowers at the base or arranging some of the excess rocks around it. I'm leaning towards flowers. Something soft that will look pretty under the light at night.

I have been asked to post a couple of announcements. First, Tom Segale sent me this message: 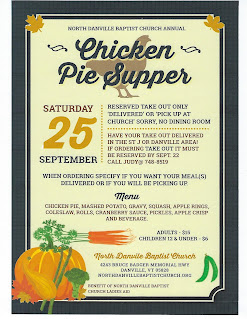 Then, Liz Sargent asked me to post about the No. Danville Baptist Church chicken pie
supper that's coming up soon! That's always a great meal, and I've been looking forward to it. This year it is take-out only because of the Covid upswing, but that works very well, too. We're all getting used to getting take-out meals these days instead of eating inside with large groups of people. Just be sure you call in to reserve your meal(s) before the deadline
of September 22nd. The supper is on the 25th. Call Judy at 748-8519 to make your order. Click to make the poster larger so you can read the menu. Adult meals are $15, children 12 and under $6. 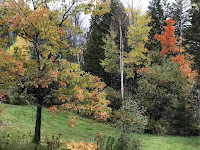