Sometimes I watch "The Talk" on CBS. I usually skim through to see who they have on as guests and to get an idea of what subjects they are talking about, and I seldom watch the whole thing. Today I was skimming through and one of the topics was about shopping with your mother and whether any of the ladies took their mother's advice about clothes when they were young.

A remark by Sheryl Underwood reminded me of my own experiences. Sheryl quipped that she and her mother never went shopping together; they sent an order through the Montgomery Ward catalog for school clothes and that was it.

I think I have mentioned before that ordering from the Montgomery Ward and the Sears Roebuck catalogues was always a big event in the late summer each year when I was growing up. We didn't have much money and none of the kids at the Plains School were the least bit conscious of the latest styles or trends, and I don't remember ever even talking to my peers about clothes. We were all happy to have something warm and comfortable to wear, I guess. Some had more and better clothes than others, but none of us paid that much attention to what someone else was wearing. Except one boy whose parents bought him a new pair of shoes for school and for days he stood on a board at the side of the school yard so he wouldn't get his new shoes dirty. I think we picked on him at least a little for that, but I'm sure the teacher intervened on his behalf; and eventually he returned to being a kid playing with the rest of us on a wet and sometimes muddy playgound. 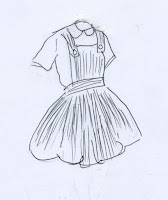 My mother made a lot of my clothes and often adapted hand-me-downs from my older cousins for me. I remember one year she bought yards of cotton material and made pinafores for me. They were all the same pattern and all were striped. I had a blue and white striped one, another in green stripe and one in pink. Pinafores were worn with a blouse or sweater, and I remember that I really liked mine. I've done a quick sketch to show you what my pinafores were like.

I remember one trip to a store to buy clothes. We went to St. Johnsbury, I think to a shop called Weiner's, or maybe it was the Jeannette Shop or Hovey's. I don't recall exactly, but I do remember that we traipsed up and down Railroad Street trying on coats. I think I was perhaps in high school and my mother thought I needed something dressier than the plain jacket that was part of my "snowsuit." I finally tried on a long, bright green woolen coat that came to my knees. It had a lovely shiny, soft lining and I remember how elegant it felt and that it seemed very expensive. I also remember hesitating to say how much I liked it because I felt it cost way more than my mother could spend on it, but apparently she liked it, too, and she bought it for me. I wore that coat for a long time and always felt special in it.

I remember going to Nolin's Shoe Store on Eastern Avenue to buy shoes. My feet were exceptionally "long and narrow" according to the metal measuring device at that the clerk used. He brought out some "official Girl Scout shoes" for me to try. They were heavy and clunky and I hated them, but my mother said I had to treat my feet well and proper shoes were a must. I should add here that I was not allowed to go barefoot - ever. Of course I did, when my mother wasn't around, but according to my mother, going barefoot was not only dangerous on the farm (because of injury or picking up infections, and she was right about that), but it would make my narrow feet "spread out." I'm not so sure of the validity of that reasoning. I guess narrow feet were in fashion in the 1930s and 1940s, at least in my mother's mind. She bought those GS shoes and I hated them. I had to wear them one summer, and they were hot, heavy and the homeliest contraptions imaginable. Fortunately for me, they turned out to be not up to the rigors of protecting a farm kid's feet and they soon began showing serious wear (being wet, dried out, muddied and scuffed up probably didn't help) and before the end of the summer either I had grown out of them or they were just too dilapidated to be useful.

The narrow feet thing persisted until I was out of high school and on my own. The only AA or AAA width shoes available were styles my grandmother would wear, but my mother insisted that I have at least one pair of "properly fitted shoes" for best. They were always painfully tight and uncomfortable. Most of the time I wore moccasins or canvas tennis shoes, which were far more comfortable. Once on my own, I bought shoes wide enough that they wouldn't give me blisters.

When I was in high school, we had classes in Home Economics where we learned to sew. I remember one of my projects was a navy blue corduroy dress. It was princess style, buttoned up the front, and had 3/4 length sleeves. Our teacher, who was married to my cousin, Wesson Bolton, thought my project choice was too ambitious, but I persisted. She was a good teacher and my dress turned out to be very successful. I went on to make a lot of my own clothes after that. I had some successes, and some really dismal failures, but it was all a good learning experience. My kids like to tell stories about how I used to make garments out of sheets, blankets, curtains or whatever. All true, and today it's called "repurposing" and is very trendy!

This came early this morning from Gretchen Farnsworth:   Sadly it looks like our loons have abandoned the nest. I think because of harassme...