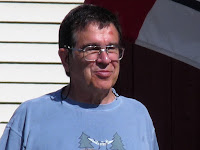 Very sad news this morning - Bill Rossi passed away early yesterday morning at the Residence at Shelburne Bay in Shelburne, Vermont. Diane was with him, and his brother, Ted and wife, Nancy had been with him the day before.

Bill made friends wherever he went. Fred and I often went with Bill and Diane for dinner or to investigate something Bill was interested in. Our adventures sometimes took surprising turns as Bill's attention turned to something totally unexpected, or he struck up a conversation with a stranger, but there were a lot of good times before Bill became ill. 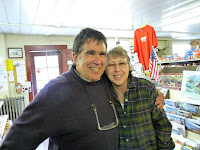 Bill was a big supporter of Joe's Pond Association and loved living at the pond year around at the same spot where his parents, Ted and Alba Rossi, had a summer cottage for many years. There were trials of snow, slippery roads and daily commutes to Barre during the first years, but after Bill retired, he concentrated on other things like daily trips to the post office at Hastings store where he enjoyed banter with anyone and everyone - especially Diane Jeger when she was working at the post office. (Photo of Bill and Diane at right.) 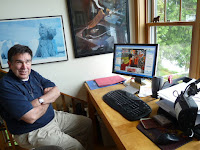 Bill spent a great deal of time putting together a photo directory of all the cottages on the pond. He and Fred spent many hours in Bill's boat getting photos for the book, and took many road trips together to get photos of the ones that were not directly on the water. Diane was a huge part of that book, as well, typing, editing and encouraging. (Bill, the author, at his computer, right.) Bill had a large circle of friends at Joe's Pond.

Fred always enjoyed Bill's enthusiasm and although hey were opposites in many ways and sometimes had opposing ideas about politics or other matters, I believe each respected the other's opinions and they remained 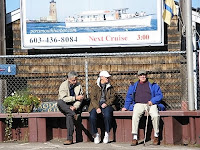 friends. Bill had a unique wisdom and a healthy appetite for life. He enjoyed good movies, jazz and opera, and Diane's cooking. He was always on the lookout for hermit cookies, a good hotdog, whole-belly fried clams and Philly cheesesteak sandwiches. Bill enjoyed traveling. Diane took this photo when we were on a trip to Maine and waiting for the next boat to take us on a cruise around Portsmouth Harber. Bill was also generous in opening his home to visitors. 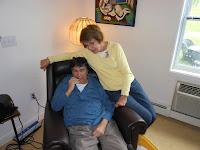 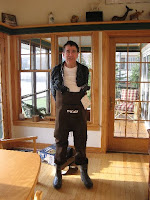 Left, Bill models the waders he wore when getting his boat in and out of the water, and on the right, a photo by Andy Rudin of Bill and Diane after Bill moved to the Residence at Shelburn Bay.

Bill was one of a kind and will be missed by his family and many, many friends.

Our most sincere condolences to Diane and the family. Cards and messages may be sent to Diane at P. O. Box 228, Danville, Vermont 05828.

This came early this morning from Gretchen Farnsworth:   Sadly it looks like our loons have abandoned the nest. I think because of harassme...