We can only hope that the snow we got last night and today was Old Man Winter's way of telling us "goodbye" for this year! I measured 1.5 inches - enough to cover the muddy ruts and potholes on back roads and slicken up the paved roads. As if getting a new covering of snow wasn't enough, the wind has howled and blown down trees and branches, disrupting electric service throughout most of northern Vermont. It was out off and on here much of the day, and mostly came back on within a few minutes, but at one point it was off long enough so I though I should perhaps report it so Washington Electric would know. I got their recorded message naming all the towns that were without power, and of course Cabot, Walden, and surrounding areas were all on the list. I think with the new meters they may automatically know where outages are, so probably my call was unnecessary, but at least I found out how extensive the problems were.

I had an early appointment in St. J. for physical therapy this morning and it was quite an adventure driving down West Shore Road. All the muddy spots were camouflaged by the snow, and there were numerous new muddy spots since Friday when I was last over the road, so pretty much whatever I guessed was the best route wasn't necessarily the right choice - and what looked like perfectly smooth, firm road ahead sometimes turned out to be a real bog. I made it out ok, and by the time I came back about an hour later, there had been enough traffic so the trouble spots were evident. Spring driving on Vermont's back roads can be quite an adventure.

Gretchen Farnsworth braved the cold and wind to go outside to take this photo today. So much more water showing that in the pictures she sent earlier. Here's what she wrote: 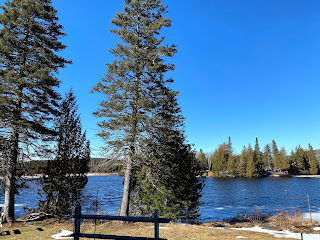 As you probably know it looks a lot warmer out there than it is. I put on my down coat to
take this picture. You can hear the ice crackle from the wind and white caps breaking up the edges. We’ve seen the usual geese, common mergansers, mallards, three sea gulls(?!) and the eagle over the past two days. I love to see them all migrate through. No loon yet. I’ll let you know.

Thank you, Gretchen. Great picture, and the water looks inviting - almost like summertime! I'm sure the temperature is only a mite above freezing, though. Tomorrow we may see temperatures in the 60s, and that will seem really nice after today!

Henretta Splain reported that she talked with an ice fisherman who told her the ice is still over a foot thick. That is hard to believe, especially since he was probably fishing near the islands which is not far from where the above picture was taken. Wherever he was, he said under the foot or so of hard ice there is slush. That is logical with runoff from the recent rain coming into the pond.  As far as I know, the block for the Ice Out Contest is still sitting straight and firm - no sign of melting around it yet. Tomorrow may change that, though.

Right now the wind seems to be dying down - perhaps going down with the sun. That often happens. I'm still showing a temperature of only 31.3F, so melting has slowed today except for spots like my paved driveway and West Shore Road is once more a muddy dark ribbon between dirty snowbanks.

We are hearing reports of an increase in Covid cases in our immediate area. This has meant some of the schools are closing again, either from a shortage of staff because of positive test results, or in some cases high schools seem to have some outbreaks. According to the Vermont Department of Health, there are 438 recent cases throughout the state; Caledonia County reports 83 and Washington County 85. North of us, Lamoille, Orleans and Essex counties all have reported a big surge, as well. It will be interesting to hear what Gov. Phil Scott has to say in his press conference tomorrow. This is sad news, coming just as some of us were beginning to feel a bit more comfortable getting out and about again. Obviously, we cannot let our guard down yet. So keep those masks on, stay a good distance from other humans, avoid crowds and traveling to other states.

Be well and as happy as possible under the present conditions of Covid restrictions. 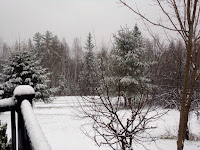