This statement came this morning from JPA President Joe Hebert: 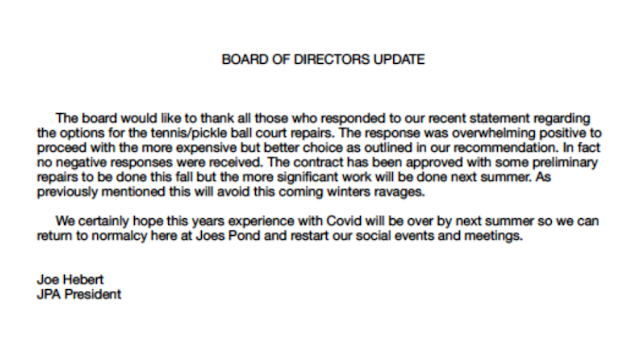 Isn't it nice to know that some groups can come to an agreement without a lot of anger and disagreement? Good job, JPA members!

I had an interesting phone call from a fellow Cabot High School student I haven't seen in probably 70 years, give or take. Johnny Greaves lives at Walden Heights - very near the farm he grew up on; but after we left high school - John graduated two or three years before I did - I didn't get back to Cabot area much. That's not to say I didn't come home - I did, but just to Cabot Plain. The village, Walden, and other communities nearby were not part of my "stomping ground" after I went to work in St. Johnsbury. John was wondering if I might know the whereabouts of his cousin and another student at Cabot, Earlene Barnett. I  remember Earlene very well - cute as a button, small, dark and sparkly. She was a little younger than I, I think, but I always admired her spirit. I did some checking and found she married Richard Lambert in Northfield in 1949, but they were divorced in 1952. I didn't find out much else on line, but I didn't spend a lot of time on it, either. I'm sure John will find someone who knew Earlene later. I think she worked in St. Johnsbury for a short time, but can't be certain of that.  Anyway, it was fun reminiscing about various people we both had known so many years ago.

Our weather is certainly taking an autumn turn. Fred and I went for a short drive yesterday - the main objective was a creemee at Tootsie's in Walden - and there are a few bits of color beginning to show up here and there. What spots of color we saw tended to be very brilliant red - possibly a good indicator this will be a spectacular year for color! That should cheer up lots of folks who appreciate the Vermont colors this time of the year. We probably won't have the same numbers of visitors this year, and we hope what we have practice safety measures by wearing masks, distancing and don't throw any large parties! We didn't take the camera with us, so I don't have pictures to show you - but we enjoyed the ride along the Bayley Hazen Road and the Noyestar Road that we haven't been on for quite a while. Lots of new houses on those roads - amazing how it has become populated. Vermont is a popular retreat these days - even more than before Covid-19. People appreciate that our infection count has remained low and many who can afford to move here are doing so in hopes of escaping the serious outbreaks in other parts of the country.

There is so much  anger and dissension going on today - the situation in Washington, D.C. is deplorable, embarrassing and terrifying all at the same time. That is hard for me to understand - but even more distressing is how supposedly intelligent human beings can treat each other with such disrespect and cruelty. Every day the crimes being reported all over the nation are escalating, and there seems to be no voice of reason to calm things down so solutions can be worked out. These things go in cycles, and right now everyone is on edge. The pandemic, politics, natural disasters of hurricanes, floods are crowding out reason. Any one of those events would cause extreme stress, but now we have everything threatening people all at once and it's more than some people can withstand without some calm, thoughtful guidance - which is so glaringly lacking in our nation right now - and they do things, say things, they would not dream of in normal circumstances. Tensions are high, but we will get sanity back at some point. This time in history will be one many of us will not remember with any nostalgia.

New Possibilities for the Rail Trail

Joe's Ponders will be interested that there are conversations going on about the Lamoille Valley Rail Trail (LVRT) that follows the eas...